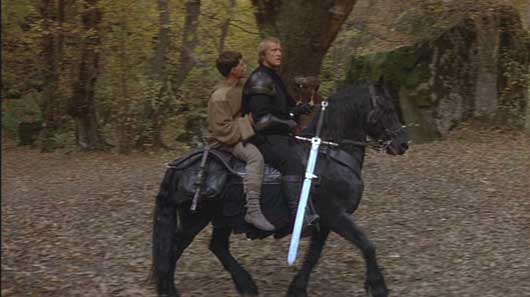 The Friesian horse, that black, beautiful breed which looks like an animal straight out of the Renaissance era was first introduced to the general public in the USA in 1985. The event was a fantasy movie named LadyHawke. Here is  Ladyhawke – digital download of the movie

To horse lovers the human stars never did shine as bright as the huge black horse named Goliath in the movie. The horse was a Friesian, a light draft breed from the Netherlands. The hero’s horse was played by several different black horses but was mostly played by Othello, a 19 year old stallion. I found this video tribute to Rutger Hauer (the hero in the movie) riding Goliath.

The music is not the same as the music in the movie but I have a story about that further down in this post.

Rutger Hauer also fell in love with the breed and when he was living in Southern California during the late 1980’s he owned one and use to show it off at the LA Equestrian Center. He was a skilled rider by the time he did this movie, since he had been riding since the age of 15. He is also a very skilled swordsman. For a real fun read go to Rutger’s website and read about a 3 hour ride he had in 2003. Edited to add – Alas, when Rutgar passed away, his website was taken down.

Here is another short video of the sword fight on horseback at the climax of the film.

The entire set for that scene was built in the studios in Rome. The floor is made of rubber to help the horses from getting injured. You can find out more about the behind the scenes of the filming from Rutger Hauer himself at his website. Again, that website is now gone.

I was curious as to what ever happened to Othello after the movie was made, so I went in search……….. and found this on the Friesian Horse Associasion of America website:
“Othello was a circus performer for Manuela Beeloo, his owner. His sire was Ritske 202 and his dam was Paulowna, ster (s. Gerke). Othello retired in 1994 with a final performance at the FPS stallion keuring”   So in 1994, Othello would have been about 28 years old.

The music in the movie holds a special place in my heart. To me it was written with horses in mind. It was in the early 1990’s that I was actively showing my first horse, a stunning dapple grey Arabian gelding. He was graceful and flashy with his black mane and tail and dapple grey body. I was showing mostly western pleasure and halter at the time when I discovered liberty class. Now liberty class is where you have a beautifully groomed horse, 3 minutes of music, an arena and an audience. The class I entered was a jackpot class, which means that you pay to enter and winner takes all the entry fees. The music I chose was from the movie Ladyhawke and If I remember correctly it was the second track on the album.

I released my horse in the arena and he practically danced to the music!! He ran, trotted and reared up as if almost on cue. When the music ended he calmly stood there until I called him to me and then put his halter on and led him out. He and I was judged on music, the horse being able to do a wide variety of moves and directions on its own without guidance from me and lastly being able to be haltered and led out of the arena in a calm and timely manner. There were 15 horses in the competition and of the 15…………… I won!! I was presented with a fancy glass goblet and money – $150 of it.

Ladyhawke the movie is more to me than just the beginning of the Friesian breed in America, it was about my horse too, that little flashy Arab who could dance to music.