I came across a rather bizarre phenomenon today. I have an adult acquaintance who loves horses but doesn’t know that much about them when it comes to daily care of them. She knows I have horses and today asked me if I was interested in looking at a horse book that she had brought with her. It was the most bizarre horse book I had ever seen.

The book is written by a Donald Monroe and was about his theory that tangled manes were the product of visitations from Bigfoot. Yes you got that right, Bigfoot. This book was about 1.25 inches thick and full of short stories with sketches and photos of knotted manes.

Update : I found out that Mr Monroe was in the area just a few days ago setting up a display of his books. That was probably where my acquaintance got her copy. She did tell me that it cost him about $65 a book to have them printed. I didn’t have the heart to say he got ripped off, but oh well. She was trying to unload her copy for $20………..good luck with that. 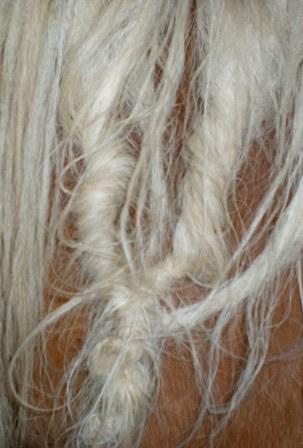 Can you just picture it……….. a large smelly creature, gently braiding your horse’s mane in the dead of night without the horse freaking out? I know I can’t and neither can my horse.

Us horse owners know that knots and tangles in manes are caused by at least 3 activities. One is constant head tossing. I had a gelding that would toss his head at least once an hour and in a few days would have knots in his long, fine haired mane. I had a cure for that and it was Show Sheen

, the most amazing detangler I have ever used. Next is the horse rubbing on something causing the hairs to tangle. Another cause is the fact that horses like to groom each other and the mane is often the sight of the mutual grooming. 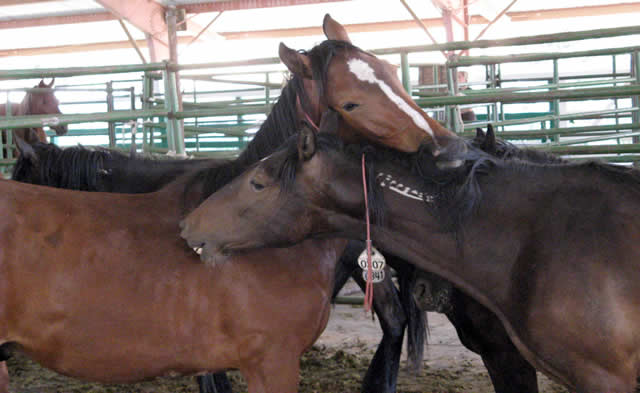 So how in the heck did tangled horse manes become a paranormal mystery? From what I was able to find it is something that is not fully understood by non-horse owners and that the tangled mats look like a feeble attempt at braiding. The Bigfoot theory is just the latest in a long line of myths about horses manes getting braided. There are stories of witches, goblins and fairies in Europe who are the supposed cause of tangled manes. Of course in the USA we have Bigfoot (never mind that the person who shot that famous film footage of Bigfoot fessed up and told everyone it was a hoax along with the fake footprints).

It sure is odd that those tall tales don’t mention tangled tails, then again it would make for some great tongue twisters.

I find it totally bizarre that people are that gullible to believe in such fairy tales. Next time I wake up with bed head, I’ll just blame it on Bigfoot.

One final thought, I wonder how Mr. Monroe would explain tangles in horses’s manes that live in the heart of a big city, like they do in New York or on the San Francisco peninsula, no Bigfoots anywhere near there, but yet horses manage to get tangled manes.

What type of horse owner are you?