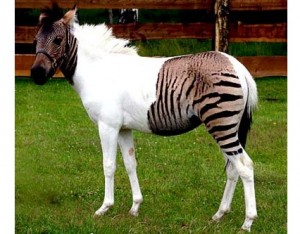 So what other kinds of crosses are there?

All off spring that resulted from crossings of horse and closely related equines (donkey, ass, zebra) are called hybrids. The great majority of hybrids are sterile, meaning that they themselves cannot reproduce. That is due to the fact that each of the equine species has different number of chromosomes.

There is a debate over what each resulting hybrid is called. Among mule owners most mules are called mules but some insist on calling theirs a hinny (the result of a mating between a stallion (horse) to a jenny (donkey).

The zorse is the result of a horse and zebra mating. If you wander the internet you will find variations of the name and even arguments over which one is the father, horse or zebra to have the name of zorse.

The photo above is of the zorse, Eclipse. You can find out more about her at this article at All the Creatures